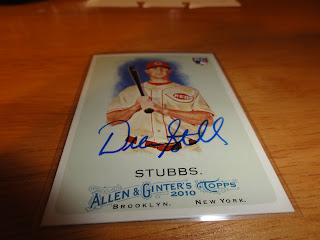 Once again, I am showcasing my TTM a day late, somehow that always happens.  This card is an autographed 2010 Allen & Ginter rookie card of Reds OF Drew Stubbs.  As you can see, the scanner is still not working but I think I did a solid job at taking the photo but the photo does not do it justice, the auto looks amazing on the A&G.

Stubbs is currently playing in his second season with the Reds but this year is his first full season.  Stubbs played in 42 games last year with 180 at bats where he hit .267 with 17 RBIs and 8 home runs.

Stubbs' power numbers went way up this year in which he hit .255 with 22 home runs and 77 RBIs.  His team is currently down 1-0 but winning today’s game 4-3 in the 7th inning in the NLDS against the Phillies.

I would like to thank Stubbs for taking the time to sign this card for my collection, especially during playoff time.  I hope him and the Reds can pull a win tonight and win the series because man, do I hate the Phillies.
Posted by Steven M at 8:55 PM 3 comments: 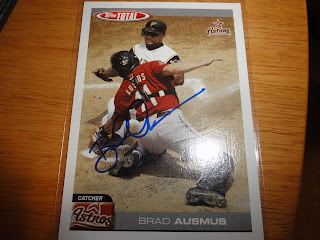 It's been over a week since I posted, the main reason is because my scanner isn't working right but I decided until it was fixed I would just take the photos myself.  This post is a bit late, I planned to do this on Monday but the scanner problems once again hurt my chances at a post. Well onto the auto, this post is in honor of the man pictured, Brad Ausmus.

I wish Brad all the best in his life after baseball and would like to thank him for taking the time earlier this season to sign this card for me.  I personally think we will see Ausmus as a manager/coach in no time.
Posted by Steven M at 5:15 PM No comments: